Professor Panos Prevedouros was the Technical Program Coordinator for the 1st Symposium on Freeway and Tollway Operations of the Transportation Research Board. 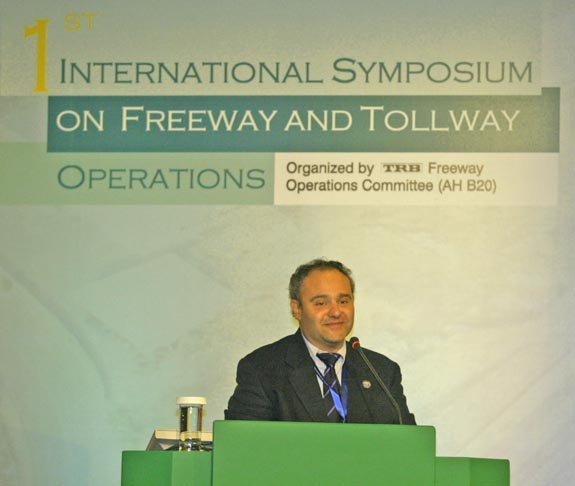 The Symposium provided a platform for about 500 international transportation
professionals, managers as well as politicians and other officials
from 22 countries to present their views, knowledge and experience
on freeway and tollway operations through 116 formal presentations
which are included in the Symposium”s Compendium of Proceedings.

Consistent with TRB”s mission, the Symposium and its Compendium
served the vital role of disseminating important information on highway
transportation infrastructure.
Presentations addressed topics such as the operation of traffic control
centers, various permanent and temporary methods for controlling the
lanes of expressway facilities, tolling issues ranging from technologies
of electronic systems to simulation of toll plazas, to models analyzing
the efficiency of toll booth operators according to their level of
fatigue, methods for the efficient ramp metering of freeways and issues
relating to speeding, speed control and traffic safety and policing.

In addition, various executives from Europe and USA spoke about the
policies, transportation priorities and investments in their regions
as well as about their future plans for expansions and improvements.