On October 15th, 2006, two earthquakes with magnitudes of Mw6.7 and
Mw6.0 struck in close succession just off the Northwest coast of the
Island of Hawai`i. No deaths were attributed to ground shaking, and only
minor injuries were reported, including two broken bones. Damage caused
by these earthquakes had exceeded $100 million as of the writing of this
report, without including damage to private residences. It is likely
that the total cost of these earthquakes will exceed $200 million. This
is significantly less than the $17.8 billion in damages caused by the
similar magnitude 6.7 Northridge earthquake in the Los Angeles area in
1994. The low injury rate and economic loss is attributed to the relatively
rural area in which the Kiholo Bay and Hawi earthquakes struck, and the
relatively large 40 km (25 miles) focal depth of the M6.7 Kiholo Bay
earthquake. It was also fortunate that the earthquakes struck just after
sunrise on a Sunday morning. 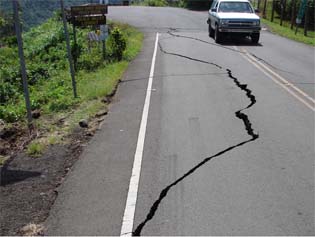 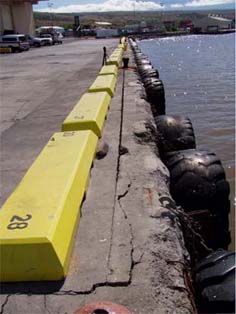 Structural damage occurred at a number of buildings, bridges and portOverall, the vast majority of built infrastructure in the vicinity of
the earthquake epicenters survived with little or no damage. Recorded
ground accelerations show a maximum horizontal ground acceleration of
1.03g and a maximum vertical ground acceleration of 0.72g at the Waimea
fire station, about 32 km (20 miles) from the Kiholo Bay earthquake epicenter.
Shaking reached Intensity VIII on the Mercalli Scale as reported by residents.
Strong ground motions lasted for approximately 20 seconds during the
Kiloho Bay earthquake, and 15 seconds during the Hawi earthquake
.

facilities, particularly those closest to the earthquake epicenters.
Much of the damage to buildings was in the form of failure of non-structural
elements such as ceilings, light fixtures, plumbing and other utility
lines. Although over 1,800 individual residences were damaged to varying
degrees, tens of thousands of light-framed timber homes in neighborhoods
close to the epicenters survived with virtually no damage. The provision
of shear walls and continuous load-path for hurricane wind design may
have contributed to the superior seismic performance of many residences.
Many of the homes that were destroyed or experienced severe damage were
constructed on pier-and-beam foundation systems resting on small loose
concrete foundation blocks. The ground shaking resulted in lateral movement
of the posts off these substandard foundations resulting in moderate
to complete damage to the residence. Longer duration or more intense
ground shaking would likely have caused significantly more damage to
residential structures elevated on pier-and-beam framing.

Numerous rockfalls and slides occurred in road cuts,
embankments and natural slopes. The extent of these failures diminished
considerably toward the more populated centers of Hilo and Kailua-Kona.
Because of the lack of redundancy in the highway system on Hawai`i Island,
road closures due to rockfalls or landslides can have a devastating effect
on emergency response and economic recovery efforts. For a number of
hours after the earthquakes, the area of North Kohala, including the
town of Hawi, was cut off from the rest of the island because of road
closures on Highways 250 and 270, the only access roads to this region.
Fortunately, the rockfalls and landslides caused by these earthquakes
could be cleared relatively easily, and all roadways were open to at
least one-lane traffic within a day or two of the earthquakes. It was
noted that wide shoulders on Highway 19 North of Kailua-Kona were able
to accommodate much of the rockfall material without encroaching on the
driving lanes.Some damage occurred to dams and irrigation ditches in
the Waimea-Kamuela area. Two dams experienced earth fill disturbance and
cracks along their crests, while at least two others showed clear evidence
of incipient slope failure on their embankments. A system of irrigation
ditches feeding some of these reservoirs was interrupted due to debris
blockage. Roadway embankments were affected at a series of locations, in
one case resulting in the collapse of a traffic lane on the approach to
a bridge. A few retaining walls collapsed, primarily poorly-built, un-reinforced
and un-mortared rock walls.

One of the two major commercial ports on the island,
Kawaihae Harbor, sustained major damage from liquefaction and lateral spreading.
This facility is located less than 24 km (15 miles) from both earthquake
epicenters. Much of the fill material under the shipping container handling
yard consists of dredged fill. As this material liquefied, the resulting
lateral spreading caused significant vertical settlement of the asphalt
pavement, and lateral displacement of the pile supported concrete piers.
Large torsional cracks in the reinforced concrete edge beam of one of the
two pile-supported piers, Pier 1 (North pier), were attributed to this
lateral movement. It is unknown at the time of writing this report if any
damage had been incurred by the piles supporting this pier. Pier 1 remains
closed indefinitely.The lateral spreading also resulted in deformation
of the pre-manufactured metal frame warehouses adjacent to the concrete
piers. Although damage to these buildings is relatively minor, the potential
remains for further liquefaction of the fill materials during future earthquakes.
No damage was noted at Hilo Harbor on the East side of the island, however
it is known that much of the harbor is constructed on fill materials that
are susceptible to liquefaction.

Because Hilo and Kawaihae Harbors are the only two ports on Hawai`i Island
capable of handling the barges that transport most of the island”s supplies
from Honolulu Harbor, they are an essential lifeline for the inhabitants
of the island. Remedial measures should be taken to replace or stabilize
any fill material with liquefaction potential in critical harbor facilities
to avoid loss of function of either of these ports during future earthquakes.